When DanRoses took ownership of an older nursery on the Danish island Funen four years ago, seven fertilizer mixers from the 1980’s controlled all watering in the production, but the process was always monitored by the grower due to instability and errors. Now, fewer new mixers give better results – and peace of mind.

Since the 1980’s, seven AMI 900s and AMI 90s watered the 25,000 m2 indoor rose production at the Danish nursery DanRoses. But in later years, the grower began overseeing every single watering during daytime manually – simply because he was unsure of the old mixers’ ability to perform and whether the valves would open as intended.

“Some mornings we discovered that the planned watering at night hadn’t even started and we knew that we would not be able to catch up with watering before having to pack roses in our packing department. As a result, we would take a loss,” says Lars Olsen, who is responsible for the daily management, production, and sales at DanRoses.

Now, the seven old mixers have been replaced with three new AMI Penta from DGT by Senmatic, and the system needs no human control.

“We now know that irrigation is carried out as planned with the correct dosage of fertilizer. I drive to work in the mornings with far more peace of mind and we experience less loss in our production.” 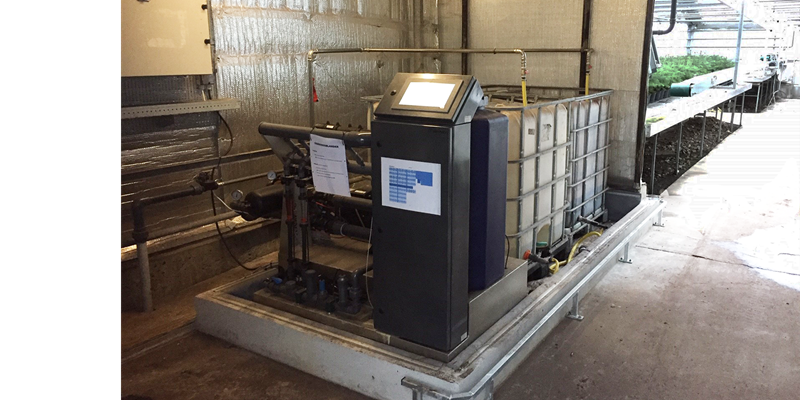 The old mixers had active watering activities for 12 hours every single day. One pump could control only one watering valve at a time and it took 40 minutes to water per valve.

With the AMI Pentas, active watering activities have been reduced to just 2,5 hours daily, irrigating through three valves simultaneously – in just 20 minutes.

"We used to spend hours upon hours on watering. The old pumps were instable, we had no security when it came to fertilizer dosage and had to control the process manually. That time is now free for other tasks – and we even save fertilizer, because of the high accuracy of dosage. It’s much more effective.”

Even greater focus on precision and large capacity with AMI Penta

DGT by Senmatic’s AMI Penta is designed to set even greater focus on the plants’ need for precision fertilizing and accurate acidity in the irrigation water and at the right time.

AMI Penta can control up to 100 groups with individual start conditions. For each group, you can choose between 20 different recipes with information about EC, pH, and the fertilizer mix. Each group can control up to 30 valves, and these can be chosen freely between the 200 valves available today in the mixer. Up to 9 valves can irrigate at the same time which gives a maximal utilization of the capacity. Irrigation time and volume can be set individually for each valve.

How to choose the optimal irrigation and fertilizing solution

Knowledge and insights from the horticultural industry - get it here

If you have any questions or are interested in knowing what solution we recommend for your business, you are very welcome to contact our specialists

The agricultural crop breeding company Nordic Seed expects to increase the speed of breeding process from 3-4 years to just 1 year. This is done in a brand-new research facility with a full-line solution from Senmatic.