From 10 Light Fixtures to Half a Hectare

In just two years, installing LED grow lights has led to a 50% production increase as well as a 25% cut in energy usage at Dutch-based Rainbow Colors.

With more than 25 years of experience in the farming and tulip industry, CEO Bas Karsten is no novice when it comes to creating great growing conditions. Each year, he produces more than 47 million tulips at Rainbow Colors in the Netherlands, a company started by Bas himself 11 years ago.

Determined to increase his production output, Bas Karsten reached out to Senmatic in February 2014. His aim was to explore the possibilities with LED growing lights and advanced lighting control systems after several years using more traditional lighting fixtures. Through consulting with the experts at Senmatic, Bas decided to install the FL300, a light fixture offering both light efficiency and controllability as well as being highly cost efficient.

– We decided to test the LED grow lights for a shorter period to see if it was possible to grow better quality tulips than under our traditional light system. This was definitely possible!, says Bas Karsten.

A unique formula in greenhouse lighting

Bas Karsten conducted a trial with 10 LED light fixtures to test the implementation as well as the effect on his specific production. Bas Karsten elaborates:

– When we experienced the increase in quality of our tulips, the decision to install the LED grow lights throughout our entire production was not difficult. After three seasons, we’ve gone from 10 light fixtures to half a hectare, and we’ve enhanced energy savings with up to 25%. 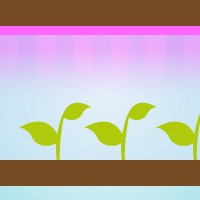 Create the opportunity of doubling production output – whether it may be tulips, lettuce or other cultures – without expanding production facilities and while maintaining heating costs.

Quality improvements and other benefits of LED grow light

That LED grow light systems are the future of commercial farming has been widely acknowledged for the past couple of years. LED systems have several advantages, all centred around production optimization and efficiency. Furthermore, by enabling vertical farming LED lights mean that existing production facilities can be utilized to their full potential.

Besides the obvious vertical farming benefits, Bas Karsten has experienced notable quality improvements in his production thanks to the LED grow lights’ controllability features. Thus, Bas Karsten discovered that the quality of the tulips increases when they are exposed for LED light for seven days and natural lighting for 14 days. He can adjust this combination continuously due to the easily adjustable settings of the LED system. The fact that the LED grow lights produce almost no heat compared to regular light fixtures further benefits the production quality of the tulips.

“Quality is better, we have 50% increase in production on the same amount of square metres, and the LED grow lights create hardly any heat production – these are benefits we’ve experienced after the installation.”

A main factor for Bas Karsten’s decision to switch to LED lighting was the possibility to change settings according to context. Tulip production conditions are different in December than in March, and the LED grow light system makes it possible to adjust accordingly.

– Grow light systems must be customized for each specific production process and culture – and each producer is the expert on their own production, says Morten Hjorth, Global Sales Manager at Senmatic.

– For commercial greenhouses with no previous experience with LED lighting, however, it is vital that the installation and test period is carried out with experienced guidance on LED grow light systems. At Senmatic, we have experience with a lot of different cultures, and we have a clear idea about how to initiate installation of the LED grow lights. Our role is to offer advice and guidance about the implementation, to co-operate with our customers through installation and testing, and to continuously share our knowhow throughout the process.

Upscaling Rainbow Colors’ LED setup from a small-scale test to a full-blown vertical farming installation was carried out in close cooperation between Senmatic’s consultants and Bas Karsten himself.

Morten Hjorth recommends following Bas Karsten’s example, testing and customizing the LED system at a smaller scale to gain critical insight and experience as well as establishing preferences with the LED system before upscaling.

See more about our horticulture solutions and business areas.

"We are passionate about our customers harvesting their full business potential. In line with Bas Karsten’s experience, our recommendation for all our customers interested in LED grow lighting is to contact us to initiate a dialogue about the best solution."

Reach out today and find out more about the opportunities with LED grow light systems and vertical farming!