To meet market demands for high quality produce and red pigmented lettuce, Swedish-based Spisa Smaker AB invested in an LED grow light system. Not only have they seen great results in quality improvement, they have also experienced a 48% save in electricity.

A central part of managing commercial greenhouses is to continually improve crop quality and optimize production to meet market demands. Horticultural technology offers a great variety of opportunities to develop production methods and produce. In recent years, there has been an increasing demand for lettuce and herbs that not only taste well, but look decorative too. One solution to meet this demand is with LED grow lighting.

Swedish-based greenhouse Spisa Smaker AB has experienced this demand first-hand. Being Europe’s largest producer of growing herbs and lettuce, they must constantly develop their business and follow external environments. Therefore, they decided to invest in the FL300 LED grow light solution from Senmatic to increase production quality and save energy.

– We had to focus on increasing the quality of our produce, and we saw increased demand for red lettuce and herbs with more intense taste – so we needed a solution that could make that possible, says Maintenance Manager at Spisa Smaker AB, Adam Johnsson.

"The high controllability of the LED system was a big part of the decision, because we had a great opportunity to work with the pigment of our lettuce to grow the best possible crop. Besides the red pigment of the lettuce, we’ve also been able to produce a more steady crop with a higher density due to the LED system."

Several cultivars of lettuce contain red pigment. Under natural lighting conditions, producing red lettuce is possible throughout the summer period, when the concentration of sunlight is high, whereas production is difficult during the shorter, darker days of winter.

This was also a primary motivation for installing LED lighting at Spisa Smaker AB.

– We had some quite serious issues with the colour of the red lettuce during winter time and could not provide the quality that was needed, says Adam Johnsson.

– Now, we can grow red pigmented lettuce in winter time with no such issues.

For years, the general conviction was that the red colour in lettuce was induced by the red light in the sun’s rays.

– Now, however, we know that the red pigmentation is caused by exposure to light in the blue end of the spectrum, says Johnny Rasmussen, Key Account Manager at Senmatic.

This was discovered by exposing the lettuce for LED lights with a high level of blue.

– The blue light triggers the red pigment, which in return responds faster than with traditional light sources. This means that cultivars of lettuce that contain red pigment can turn red in only five days under LED light bars, Johnny Rasmussen explains.

As Spisa Smaker AB experienced, the full spectrum LED does not only affect the red colour, but also the structure of the lettuce. Whereas blue light creates a compact structure, red light makes the cells of the lettuce stretch.

– The controllability of LED lighting systems enable our customers to improve the quality of their lettuce – essentially growing better produce, says Johnny Rasmussen, adding that a good rule of thumb is to primarily expose the lettuce to blue light in the beginning of the production process. This creates a denser lettuce which increases stability at the roots.

– Exposing the lettuce to more red light later in the process stimulates growth and increases length in the top of the lettuce. At the final stage of production, blue light should be dominant to induce the red colour, Johnny Rasmussen elaborates. 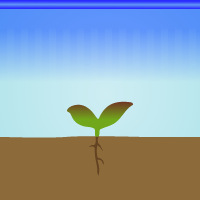 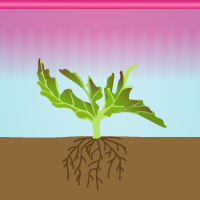 Stimulating growth and increasing length in the top of the lettuce.

Inducing red pigmentation in the lettuce.

“Total controllability is what makes LED lighting unique and efficient. You can control each step of the production process to enhance product quality.”

Benefits for all commercial greenhouses

LED lighting systems carry several advantages that all commercial greenhouses can benefit from. LEDs use significantly less energy than traditional light fixtures, creating a positive long-term impact on both greenhouse expenses and the environment.

At Spisa Smaker AB, they did not only see significant results in product quality, but also incredible results in electricity savings due to the energy efficient LED fixtures.

- When the FL300 system was used at the same intensity as conventional HPS lighting, it generated electricity savings of 48%, Adam Johnsson explains.

The use of LED lighting in commercial greenhouses is still a new practise, and one that is evolving rapidly as the benefits become evident to more and more people in the industry.

– Research is developing fast. In a few years, we will have even more knowledge – and even stronger cases and examples of businesses that have created impressive results, boosting and improving their production output significantly, Johnny Rasmussen predicts.

He believes that making the shift to LED can be key to staying competitive as well as maintaining or gaining larger market shares.

Read more about our horticultural solutions.

"More than ever before, it is vital to be able to adjust production and adapt to external developments in the industry. This is possible with LED lighting due to its unparalleled controllability. Thus, installation of an LED lighting system is not simply an interim solution for quality optimization but an investment in the future."

Find out more about the advantages of LED systems and increased lighting controllability – reach out today!