Sensors for LNG storage and distribution

Liquid natural gas (also referred to as LNG) is natural gas chilled to minus 162°C (-260°F) which makes it liquid. At this temperature, it only has the volume of 1/600 compared to its volume as a natural gas. This volume effect creates a lot of opportunities for storage and distribution of the natural gas to regions that does not have natural gas pipelines.

On the other hand, it also makes it very complex to work with, especially because of the safety precautions that has to be made during storage and distribution, when it is in its liquid form.

LNG is stored under ambient pressure in tanks, because when exposed to heat, it expands and goes back into its original volume as natural gas. Once LNG has been delivered to its destination, it is simply warmed up and turned back into its natural gas state, so it can be used.

At Senmatic, we have been delivering sensors and other equipment for LNG use for more than 10 years and our core values are high quality and a long lifespan. Our sensors can be used to monitor temperature, during cool down, filling, storage and leakage of a LNG tank.

Even though the sensors are a physically small and financially small part of building LNG storage tanks, it is a vital part, because temperature plays such a big part in LNG, and because it helps secure a safe and efficient operation.

We deliver both standard sensors to be used in standard surveillance systems, and the ability to customize sensors for specific monitoring systems or specific needs.

LNG is stored in full containment tanks that are cooled down prior to being filled with LNG, which keeps the LNG in its liquid form and makes sure that it does not expand to its natural volume.

“Because of the temperature requirements, to be able to keep the LNG in a liquid state, it is very important that these tanks are very well insulated, durable and equipped with the right type of sensors. The temperature sensors make it possible to detect different variables from the temperature of the LNG to potential leakages in the tank.“ 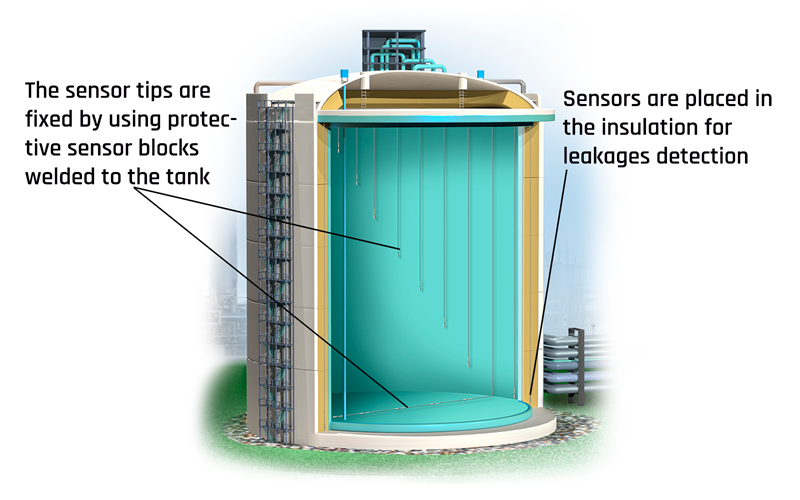 Cool down/skin temperature sensors such as the Type-MNS from Senmatic are used to monitor the temperature inside of the inner tank during the cooldown period, which happens before the LNG is filled into the tank to make sure that the LNG will keep its liquid form and volume. The Type-MNS is a mineral insulated thermometer that has a temperature measuring range from -200 °C to +100 °C

If the cool down is not done, the LNG will expand, which will cause high pressurization and potentially an explosion.

Leak detection sensors, such as the Type-MNS, are placed between the inner tank and the outer tank and detect any potential leakages. The sensors are distributed strategically around the tank and field to the floor of the tank. 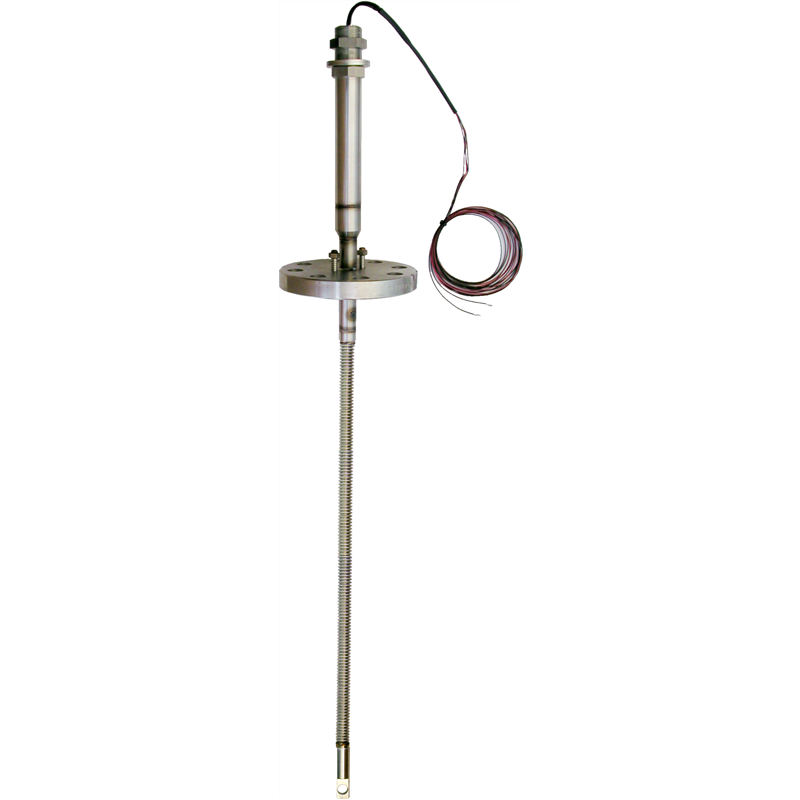 Multi spot sensors, such as the Type-NL-Cryo, can be located different places inside the tank and measure up to 16 different temperatures. It measures average temperature of the liquid gas. Together with a radar, that makes surface measurements, Level Temperature Density, it is possible to measures how much LNG is inside of the tank (inventory control).  Because of the importance of measuring the volume of LNG, it is crucial to measure the temperature.

Senmatic’s Multi-spot Thermometers are sensors offering high tolerances and accurate measurement of temperature in each spot element.  Our Multi-spot Thermometers are used for measurement of average temperatures in primarily stationary tanks systems for oil, gas and preheated storage tanks in the power industry as well as for thermal energy storage tanks where stratified temperatures need to be measured.

We supply the sensors with 4-wires connection and up to 16 spots, which can be calibrated with certificate and coefficients to achieve maximum accuracy for Custody Transfer Systems.

Read about our multi-spot sensors 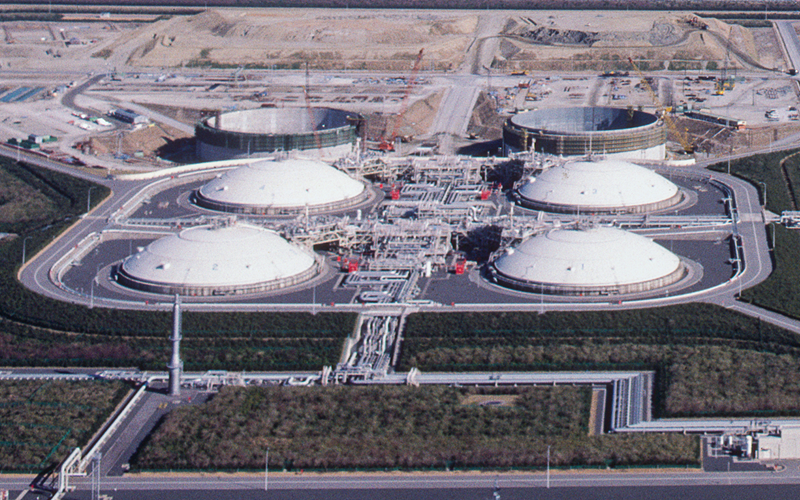 LNG tanks on land can be placed both above ground and with part of the tank underground. These tanks are built in all different sizes depending on the specific needs and can be up to 250,000 cubic meters. The temperature sensors can be up to several hundreds meters long. The tanks are typically build with an inner liquid containment steel tank, on the outside a concrete or steel tank for secondary containment control and in between a thermal insulation to minimize liquid boil-off.

The tanks are used for storing of the natural gas, and they work as the pick-up point for transport vehicles and vessels.

Because the tanks are made from metal plates that is welded together, danger can occur when the metal plates are stressed (for example by expansion of the LNG). This can cause the welding to break, which then creates a leakage. This can happen in both the storage tank and the pipeline transporting the LNG from the tank to the ship, truck or train.

A leakage can be a potentially very dangerous situation, because the super-chilled LNG is flammable, and if a big spill happens, it can set off an uncontrollable fire.

Because of this, it is very important to use high-quality and reliable temperature sensors to detect any potential leakages anywhere in the tank, to minimize the damage as much as possible and run a safe operation. 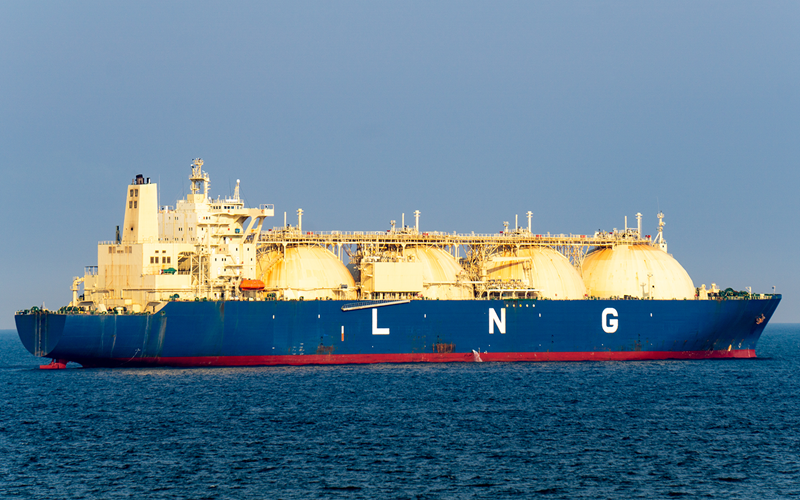 Marine-based LNG tanks are in some ways similar to the land-based LNG tanks. However, the marine tanks, apart from working as a storage tank, can also carry LNG as fuel for the engine.

LNG carriers are ships built with large LNG tanks to carry extensive amounts of LNG. They come in all different sizes, and the biggest ever built has a capacity of up to 266,000 cubic meters. 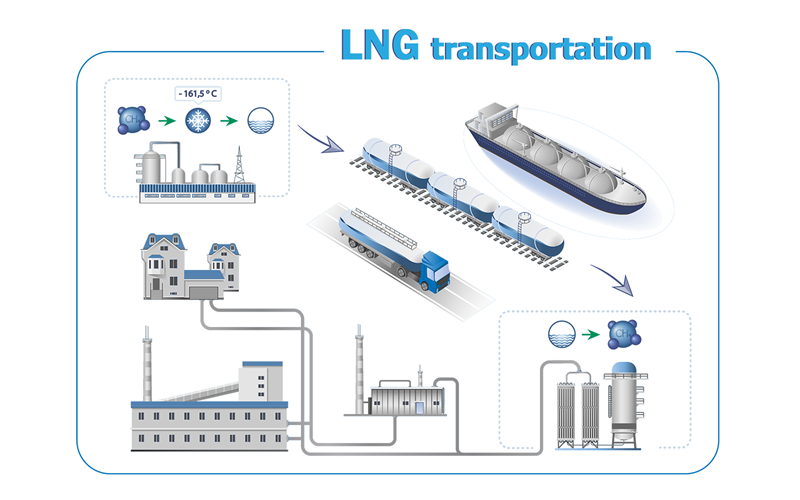 LNG can be distributed in many different ways, depending on the specific surroundings of the tanks, and where the LNG needs to go. Both the distance that the LNG needs to be transported and the geography of the location matters.

Rollover happens when the different layers of LNG start mixing inside the tank. It happens as a response to small temperature differences within the liquid. This causes the LNG to expand, due to the temperature differences in the layer. Because of the extreme compression of LNG in its liquid form, rollover can create a pressure inside the tank, which then can cause an explosion. 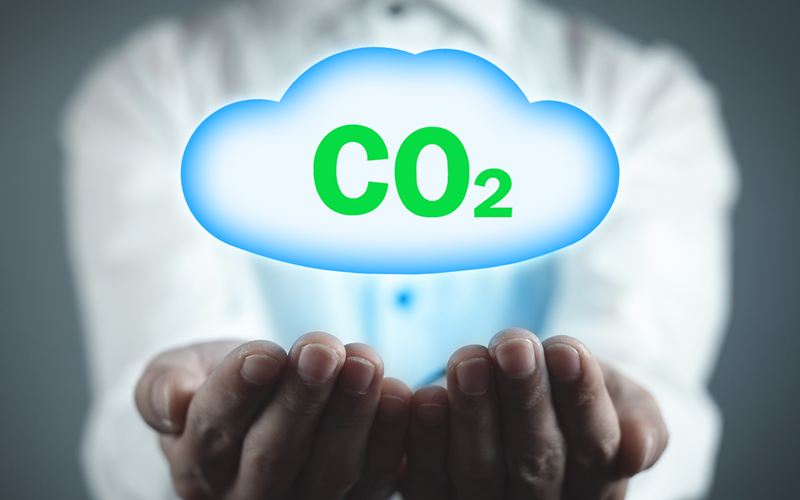 LNG is an effective solution in the goal of CO2 reduction, because it is a much cleaner burning fuel than heavy fuels such as diesel. Natural gas emits up to 50 percent less CO2 than coal and can reduce the nitrogen oxide up to 90 percent compared to heavy fuels, meanwhile the sulphur oxide emission is nearly zero.

These advantages are also the main reasons why it is an efficient choice when it comes to keeping up with some of the specific regulations and restrictions that are happening within the marine industry, where LNG is meeting both existing and upcoming requirements.

The use of LNG

LNG can be used for many different purposes and can in many instances replace diesel as fuel for engines. LNG is for example used as fuel for trains, ships, cars, trucks and used to generate power and heat homes for household use.

Contact us today and let us help you finding the right solution!

Sensor calibration - for the oil and gas industry!

In the oil and gas industry, high accuracy measurements are critical in both tank gauging and custody transfers. Since accurate measurements and valuations have a great and positive influence on refineries’ turnover, the demand for sensor calibration is increasing.